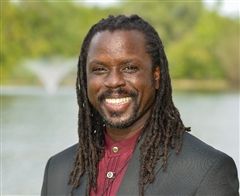 PYP, MYP and DP Music Teacher
B.A. (York University)
Member of Brant House
Mr. Andrew Craig brings a plethora of music and production experience to the SJK community! He worked as a national broadcaster for the CBC for nearly a decade, in addition to hosting high-profile events for organizations such as the Canadian Songwriters Hall of Fame, the Art Gallery of Ontario, and the Glenn Gould Foundation. A fun fact about Mr. Craig: he composed and produced music for the 3-year countdown event and the Daily Victory Celebrations of the Toronto 2015 Pan/Para Am Games!

In 2013, Mr. Craig founded Culchahworks Arts Collective, a Toronto-based organization that celebrates stories drawn principally from the African-Canadian, Caribbean-Canadian and African-American cultural legacies, having universal resonance. Culchahworks has paid large-scale tribute to such icons as Dr. Martin Luther King Jr., Bob Marley, and Harry Belafonte.
Mr. Craig believes in educating the whole student and feels that the best education teaches a student how to learn, not what to learn, so that they can become life-long learners, and their own best teacher.
Back