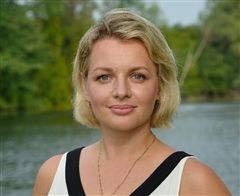 MYP and DP Dance Teacher (On Leave)
Master of Dance (Teaching and Choreography), Bolshoi Ballet Academy (Moscow, Russia)
Member of Simcoe House
Mrs. Ekaterina Tikanova was born in Tula, Russia and grew up with a love for the arts. At the age of 9, Mrs. Tikanova was accepted to and trained at Russiaʼs prestigious Bolshoi Ballet Academy. Upon successful completion within the academy, she traveled the world as a ballerina, working with a variety of renowned Russian ballet companies, including the Imperial Russian Ballet. She has appeared as a soloist in many classical ballets such as Swan Lake, Sleeping Beauty and The Nutcracker.

It was while Mrs. Tikanova was touring the world that she found herself responsible for mentoring younger ballet dancers coming up in the profession, which is precisely when she realized her love of teaching. She decided to return to the Bolshoi Ballet Academy to complete her Master’s degree in Teaching and Choreography. Mrs. Tikanova came to Canada in 2012 and is thrilled to share her love of dance with MYP and DP students at SJK.
Back