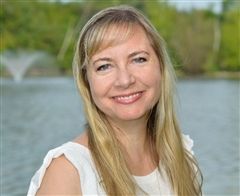 Mrs. Kareena Dainty-Edward grew up in a francophone community in eastern Ontario. Mrs. Dainty-Edward formed a strong love and respect for the French language and culture, which shaped her career path in education. Having spent summers in France as a teenager and visiting many of its beautiful regions, she hopes to bring this appreciation to life within her students. Mrs. Dainty-Edward believes that students learn French best in a fun an interactive environment. She incorporates the occasional drama game to enable her students to express themselves in French with confidence.
Mrs. Edward joined SJK in 2018, having worked previously in the UK and Canada in Catholic, public and independent schools. She was drawn to SJK’s strong sense of community, as well as the commitment to excellence that the faculty and staff have made. She enjoys travelling with her husband and two daughters.
Back